How to explain the acceleration then the regression and now the end of the covid19 pandemic? Does the virus adapt by mutating in the region of its ORF8 gene? Today is the lockdown release day in France, and after several beautiful sunny days, many of us find ourselves back to  greyness and rain. It is as if the weather has been in tune with the mood of the French people, who are called to return back to everyday life with all the stress and anxiety in this context of health crisis.

I do not have a crystal ball, but the latest studies about the data of new cases, hospitalized people etc, are rather hopeful. Obviously, we will not be able to escape a few clusters (a set of people infected from a single carrier) because the virus is still circulating. However we are more prepared now to be able to test and isolate people carrying covid19, so we can recover to a more serene life.

On Tuesday May 05th, on his morning show, Guillaume Durand interviewed Professor Didier Raoult, the eminent infectious disease specialist. The Professor confirmed that we were nearing the end of the pandemic.

The global epidemic of covid19, he said, comes in the form of a bell curve that is a common shape for the curves of most respiratory infections.

All curves of new cases, whether in France, Europe or in the rest of the world, have much the same shape, with or without lockdown.

According to Professor Didier Raoult, the number of infected people presenting at the IHU of Marseille (University Hospital Institute) is decreasing in Marseille, as well as in France and the rest of the world. The second wave therefore seems unlikely to happen because the data does not go in this direction. All institutes around the world observe the same decrease with these types of bell curves.

He has noticed that the virus is currently less contagious and therefore the risk of secondary contamination is now much lower than it was a month ago.

Let's check this assumption with the latest available scientific and medical data.

The virus is less contagious now than it was a month ago. 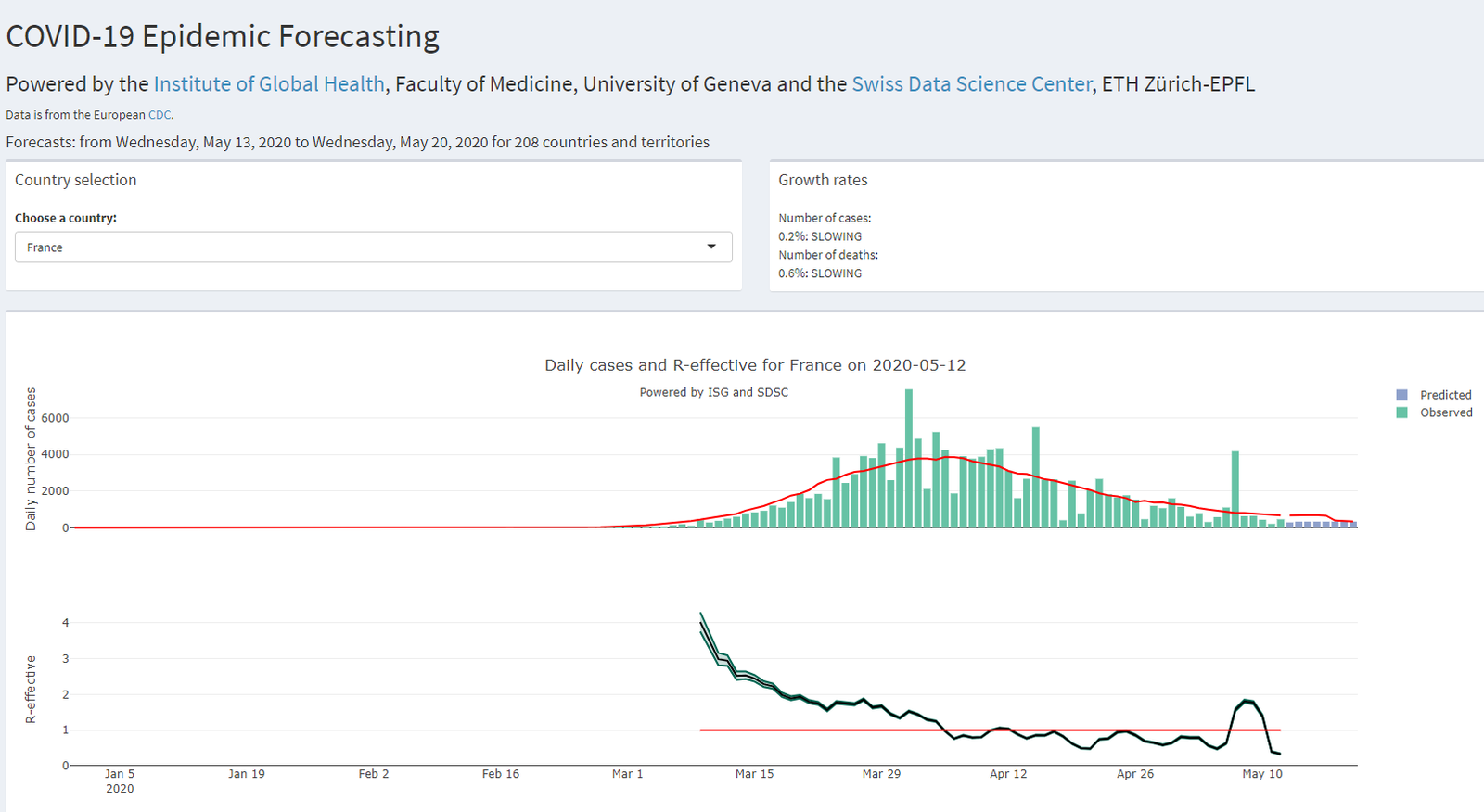 To understand this phenomenon, we will take a look at the analysis of the mutations observed and their consequences in the expression of the virus in correlation with the observed symptoms.

For those requiring a better understanding  of what I'm going to talk about, I invite you to read or reread beforehand my article on covid  19 and its mutations. As I mentioned in this article, coronaviruses mutate regularly. These mutations are occurring at a lower frequency than for influenza viruses but sufficient to see many mutants appear.

Since the first genome of Covid19 was decoded, another 17,000 genomes have been sequenced to date and shared on the GISAID site, some of which carry distinctive mutations. It can also happen that during its mutations some accidents occur, such as losses of certain parts of the genome or in rarer cases, additions.

As of April 2020, 33 distinct strains could be counted with slightly different characteristics from the conventional strain. Scientists, observed, that one of the mutants had acquired the ability to produce a viral load 270 times greater than the ancestral strain. Other teams found deletions (loss of part of the genome) on other strains of SARS-CoV-2 virus.

Was there a phase of increased contagiousness and severity of the virus?

Unfortunately, we have seen an increase in contagiousness and severity of the symptoms of the virus when the wave hit hard the European countries and New York.

How can we explain that the most serious cases would have been observed in Europe and New York?

We have seen a more deadly attack of the virus in Europe and New York, compared to the Asian countries, which were first affected. In an article of "The New York Times", two distinct groups of researchers who worked on genomes came to the same conclusion. Most cases of New York coronavirus did indeed come from Europe where the epidemic severely affected populations.

A genetic analysis conducted on a sample of 103 SARS-CoV-2 genomes, indicated that these viruses evolved into two main types (designated L and S). The S-form, the ancestral version accounted for 30% of the genomes studied, while the L-type strain accounted for about 70%. The scientists concluded that human intervention may have exerted a more severe selective pressure on type L, resulting in a more aggressive form which is able to spread faster.

Another study showed that most of the sub-strains whose mutations were on the ORF8 and ORF1a genes (coding for two proteins) were found in patients outside Wuhan.

As a reminder, there are small systems in our cells capable of translating the messages contained in our genetic material and producing proteins that are assemblages of small units called amino acids.

Europeans and New Yorkers would therefore have had more virulent strains than those circulating at the beginning of the epidemic in China.

What do we know about the previous SARS outbreak?

In 2003, during the SARS outbreak (with the SARS-CoV virus), a bell curve was observed with acceleration and regression as Professor Raoult mentioned.

During the progression of this epidemic, a number of genetic variants appeared in the human population as a result of unavoidable genetic mutations.

Towards the end of the SARS outbreak in 2003, genome sequences from viruses taken from the last infected patients were free of the gene encoding "ORF8", the latter having been removed from the genetic material of the original virus. This deletion may be associated with some form of host adaptation.

The same type of phenomenon has also been observed for batCoV (bats' SARS-CoV) viruses, with a similar disappearance of this fraction of the genome encoding for the protein "ORF8".

The early phase: the first appearance period of SARS when the ORF8 gene was present.

The intermediate phase where mutations or deletions of more or less long nucleotide sequences were observed in the area of the ORF8 gene.

And the late phase where the ORF8 gene had completely disappeared from the genome, which seems to have signed the end of the SARS epidemic due to SARS-CoV.

During this human SARS outbreak, the removal of a fragment of the genome of 29 nucleotides from the ORF8 region appears to have occurred rapidly. Several mutants from Hong Kong patients have also seen a deletion of 386 nucleotides in the same region of the genome in some patients.

SARS-CoV-2 virus is close to SARS-CoV  (90%) and among their similarities, the presence of the spike protein (S) but also the ORF8 gene encoding protein 8 (which I call ORF8).

One could therefore assume that mutations and then the suppression of this part of the genome of SARS CoV-2, could explain the phenomenon of acceleration and regression of this epidemic disease, with an increasingly less virulent expression of the disease Covid-19, until its complete disappearance. Discovery of a deletion of 382 nucleotides during the early evolution of SARS-CoV-2 (reference 6).

Has this type of mutation ever been observed for SARS-CoV-2?

Although mutations are weak in the region where genes are encoding ORF proteins in SARS CoV-2's genome, 13 variation sites have been identified by one research team, and among them, two sites (one in ORF8 and one in ORF1a) have shown high mutation rates (of around 30%).

In another pre-print article of March 12th, 2020, a Chinese team found a specific mutation on the viruses of eight patients hospitalized in Singapore. Indeed, the genome of SARS-CoV-2 that had contaminated them had a deletion of 382 nucleotides containing, among other things, the ORF8 gene, which is encoding the protein that intervenes in the replication of the virus.

They realized that the viruses, with this deletion, had been circulating since at least mid-February 2020. This may explain why the epidemic would have been better contained in Singapore and this part of the world, and not just through better pandemic management.

Is the key to the decline in contagiousness hidden in the area of the genome containing the ORF8 gene?

These results show that there may be selective mutations in SARS-CoV-2. Similar data on SARS-CoV, had suggested that the genetic variation in the region of the ORF8 gene was the result of viral adaptation.

In light of these different results, it would be interesting to sequence the genomes of the Covid-19 virus strains that have infected the latest patients to see if the region containing ORF8 has mutated or disappeared. This would eventually determine at what stage of the pandemic we are and validate the hypothesis that the pandemic curve would follow the evolution of the ORF8 gene.

Further studies will be needed to validate the correlation between the evolution of this gene mutations and the increase then the decrease in contagiousness. If this is the case, this gene could serve as an indicator for future pandemics. One drug path could be to target this ORF8 protein to render it inactive or prevent it from being translated from the ORF8 gene.

In the meantime, there is a good chance that a mechanism of this nature might be happening.

When from the trench, you see the enemy withdrawing you have not yet won the war, but something happens.

Massimo Clementi, Director of the Laboratory of Microbiology and Virology at IRCCS Hospital San Raffaele in Milan

Is there a decrease in contagiousness and a reduction in symptoms?

As far as contagiousness is concerned, this seems to be the case, if we refer to the number of new infections in areas where people have been least contained in France. This is especially true in the northen subburbs of Paris region where an outbreak increase could have been expected. However, the numbers do not seem to have grown exponentially.

For the mitigation of symptoms, we will take a little tour on Italian side and the testimony of Massimo Clementi, bearing good news. Clementi is director of the Laboratory of Microbiology and Virology of the IRCCS Hospital San Raffaele in Milan, he has been interviewed by the daily quotidiano.net.

According to him, the profile of the infection is changing, compared to the first days of the tsunami. "When from the trench, you see the enemy withdrawing you have not yet won the war, but something is happening".

In March, intensive care units were full of patients arriving at the emergencies with respiratory failure requiring ventilation. We've seen a lot of deaths. Now, these situations are increasingly rare, as confirmed by the Civil Protection data."

In the US, the virus would travel from east to west, from coast to coast, while it would lose virulence during its mutations. For example, in Washington state in the western United States, where the epidemic occurred later, the strains would be less virulent.

It would appear that mutations and deletions in the area where the ORF8 gene is located may explain the phenomenon of acceleration and regression of this epidemic disease, as Professor Raoult suggested in his explanation of how epidemic diseases work. "The end of the game" would therefore be on track.

We now have good reason to hope and see the future in a more positive way, with the return to a life where joy can finally regain its full place.

But in the meantime, caution is advised. Continue to respect barrier gestures (frequent hand washing with soap or an alcohol-based solution, sneezing into your elbow or into a disposable tissue), wearing a mask and social distancing mesures because until we have scientific proof that the virus has indeed mutated to a benign form, we will have to maintain our vigilance.